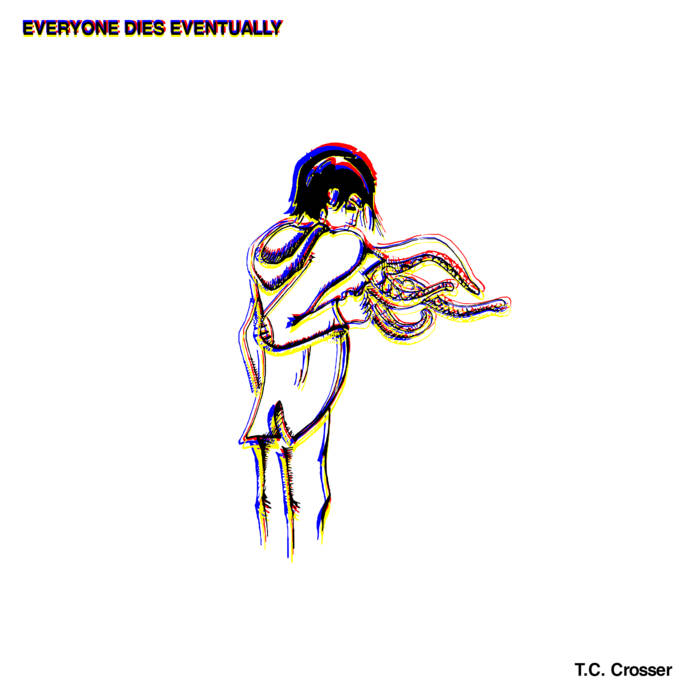 “Everyone Dies Eventually” is a 45 minute instrumental kaleidoscope of extremes. The album is a visceral work; narrating you as the central character throughout its many soundscapes. T.C. Crosser’s compositions (recorded by renowned string players Maria Im, Jannina Norpoth, Kallie Ciechomski, and Caleigh Drane) are routed heavily through guitar effects pedals, amps, and a large patchpay of found equipment. Taking punk-rock production into the classical music world, “Everyone Dies Eventually” is a journey that breaks conventions of time and tonality.

The album itself uses reverse looping and a plethora of analog effects to help reflect on the composer’s own journey from a drug addicted homeless vagabond up to now in his mid thirties 5 years sober. The main message behind “Everyone Dies Eventually” is simple: redemption through contemplation.

To score the album a unique technique was developed to route the notation software MIDI data (Finale) into Logic Pro X which then fed into a patch bay of 15 different pedals and amps. This allowed instant realization of what the scores would sound like through the specific effects and equipment prior to tracking the actual string quartet. Most of the process was streamed on Twitch with an emphasis on live user feedback in assisting with the technical aspects. There was even feedback and assistance from producer/DJ Deadmau5 in the beginning stages of this process.

Cellist Caleigh Drane (credits include: Imogen Heap, Ra Ra Riot, Belle and Sebastian) has been a long time contributor to T.C. Crosser’s many works (over ten years running) and was brought on early as the Music Supervisor. This allowed T.C. to push the limits of what the various effects and amps could produce while still maintaining musical coherence to make the process as enjoyable as possible for the string quartet when it came time to tracking.

To truly bring “Everyone Dies Eventually” to life T.C. Crosser enlisted studio-powerhouse Christal Jerez (credits include: Lil’ Kim, Jaafar Jackson, Jay Critch) to oversee and collaborate on engineering, mixing, and mastering. Together they employed unconventional mixing techniques stemming both from T.C.’s rock and instrumental work, Christal’s expertise in Hip Hop and R&B, as well as their mutual love of studio legend Sylvia Massy. The culmination of these talents significantly broadened the scope and they utilized four different recording studios throughout New York City to produce the final album.

A Note From The Composer:
This two year journey was the most collaborative, ambitious, and experimental project I have embarked on to date. At its core the album is about community and from the very beginning this work was birthed with the hard work and dedication of many people from many different walks of life. While the title can be seen as “provocative” it is also meant as an optimistic statement. Everyone does die eventually; what matters is what we do to contribute to society in the time given.

He's scored music for commercials (such as Microsoft), television (such as Visionaries: Inside The Creative Mind), and performance art companies (such as Leslie Seiters Dance). ... more

Bandcamp Daily  your guide to the world of Bandcamp